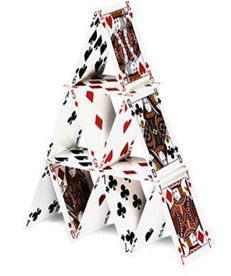 Behold the mighty castle tall
That crowns that tow’ring hill.
A baron there once held in thrall
The lowly to his will.

He looked out from the battlements
With pride his realm surveyed,
Knowing not his peril, hence
His vain thoughts him betrayed.

For guns and war machines were sent
and battered down the wall.
His power was crushed, his wealth was spent
His foes possessed it all.

For though the hills may long endure
Yet kings shall rise and tumble.
The wayward hearts of men impure,
As founding stones, shall crumble.

Behold these ruins, caked in grime,
Their former strength is lost
To endless batt’ring rams of time,
Of rain and wind and frost.

How frail the fortresses of men!
Though very few will last,
We build on shifting sands – again!
Not learning from the past.

Yes. Man has ever refuge sought
‘Ere since we Eden lost.
For this we strove, for this we fought.
So tragic is the cost.

Ambition towered beyond his purse,
To build himself a name.
His dream then stalled, and what was worse:
He built a name of shame.

In Nimrod’s tower this we saw.
He counted not the cost
Of disobedience to God’s law –
He all his people lost.

Yet, when we mock such hopeless dreams
By pride and folly killed,
Do we not start ambitious schemes
That cannot be fulfilled?

So many lives, on sand they rise
Then tumble to the ground,
Are built on greed or fear or lies.
Can solid rock be found?

Behold the towers of modern man
Built from our hearts of stone,
To raise his banner: “Yes, we can!”
To house his little throne.

He builds inside the halls of power,
Or on king Mammon’s floor.
On stage or screen, he has his hour,
But still he yearns for more.

Though riches, fame may be his strength,
His tower is undermined.
And it shall fail or fade at length
His mem’ry left behind.

There is a tower that never falls
The Lord of Hosts is He.
The righteous find within His walls
Their true security.

He is not made from cold, hard stone
But everlasting love.
And righteous justice is His throne,
His saints His treasure trove.

The founding stone in blood was wrought.
He willingly laid down
Himself, for we are dearly bought
To call us all His own.

Within His walls we healing see.
Then, sent as warriors strong
We fight dark Satan’s tyranny,
Show love and right all wrong.